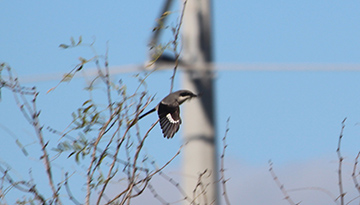 Today was another day of very few pictures. I had the bright idea that, because it was Sunday and I had a lot to do I’d take pictures along some of my well-traveled paths. There were supposed to be some benefits to this idea, especially since I had hope of finding a kingfisher in a certain area I had seen one or two of them before. I stopped at that area first. It was across the street from one of our fire stations. One of the fireman was walking towards his car and asked what I was doing. When I told him, he started talking about the blue bird he’d seen in that area. Today, however he was chillin’ in the nest, watching the playoffs.

I got a couple of white wing dove pics there but the only ones that were close to good were bird butt pics, and you can only make so many jokes about something like that. Then, further on down the road, I spied this loggerhead shrike in the trees. I can’t identify most birds from far away, but, assuming I got this ID right, I can see and know if a bird is a loggerhead from a distance. He was on one tree as I stalked him, he then flew to a closer tree, giving me a better shot, and then he flew back to his original tree. I got one pretty decent action shot…. 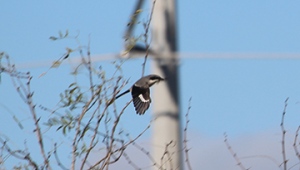 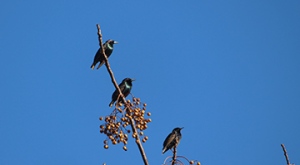 I saw a couple of birds that I tried to get shots of, but they were hiding in the trees making it hard to focus. When I got home, I walked around the block hoping for some exciting pictures. Some day I’ll have all kinds of exciting pictures that came from my back yard, but today is not that day. There were a lot of starling out and i got a few starling pictures. Starlings are an invasive species, so I’m not to fond of them. A couple of years ago, they chased a woodpecker family out of a hole that i had watched them work on for days. There is some beauty to the Starlings, though, so I’ll still take the picture. I finally found a white wing that wasn’t surrounded by branches and snapped a pic of him. There weren’t too many birds out but I can say that the pics I did take reminded me of how much I have to learn about photography.

“Compassionate toward oneself, we reconcile all inner, and the universe - from within.”

To the Salt of the Sea
irevuo

Donald on Dining in and Out.