So, it began with a dress for my wife. She wanted something special as the mother of the bride. The problem is that after her double-mastectomy, she doesn’t have the normal feminine figure. After looking around, she got discouraged because there isn’t a big market for dresses for her figure. I suggested that we work with a friend, Lindsay, who owns a company called “Frippery: Custom Costumes and Whimsical Designs.” (Facebook link) She is the wife of the man who used to be our youth minister. The key phrase here is “used to be.” He’s now the pastor of the First Baptist Church in Halletsville, about a two hour drive from us. (Spoiler alert here: it was worth it.)

Because we knew her work and we trusted her, we made the drive about three times: first for measurements, second for a preliminary fitting, and third for the final fitting and touchups. If you read any of my posts on Facebook about our travels to Houston during Lucy’s cancer treatments, you’ll know that we enjoy the time driving and talking together, so it was a great time together. On the second trip, Lindsay told us about the painted churches in Schulenberg. She suggested that we find a way to check them out. On the third trip, Lucy had her final fitting and Lindsay needed a couple of hours to put the finishing touches on her work. The painted churches were about half an hour away, so we drove up to Schulenbert and looked at as many as we could. The article I linked explains the origins of these churches better than I could, so let me refer you to the article for an explanation. The TL/DR version is that German and Czech immigrants built these churches in the styles they were accustomed to. 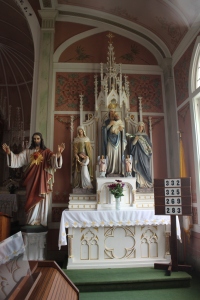 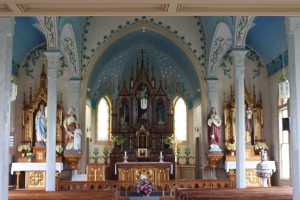 The pictures of the stained glass suffered from my eternal problem with the camera: tilt. I don’t know why, but I seem to make my shots tilt, even when I think I’m getting them straight. Here’s an example. When I try to account for that, my impression is that I’m pushing down too far the other way. I need to find a way to put a level in my viewfinder. I try to line things up with the dots, but I’m not very good, I guess. If you have any suggestions on how I can stop doing that, please let me know! 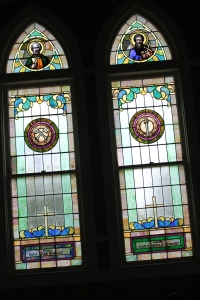 While we still don’t have the official pictures from the wedding, I do have this picture of the dress as Lucy tried it on. That was in Lindsay’s work area. We were happy with the work. Our only concern was that she didn’t charge us enough. We were going to be sneaky and add a tip to our bill, but PayPal didn’t have that option for this.

So, that’s a short look at one of the things we did while I was avoiding blogging at all. When I downloaded these pics, they were 2.5 months old. I only had one other set in between this set and the woodpecker pics from yesterday. It’s time to get back into my photography!

Follow Bob James – The Author on WordPress.com
Join 1,481 other subscribers

SHINE OF A LUCID BEING