I’ve always dreamed of being asked to give a commencement speech and share wisdom with graduates. Needless to say, that hasn’t happened. This year, though, since most colleges are doing “virtual” graduations, no one’s being asked and still many are making commencement addresses online. So I figured if no one asked them and they’re doing that, why can’t I. I thought about it because I’ve seen many of my friends, family, and students who are graduating from college or high school. I’m proud of them. Many of my friends who graduated from college have dealt with college classes and, and have still survived. No, I didn’t leave a word out. Instead of being able to focus specifically on college classes, they have gone to college and raised their families, dealt with illness, (my wife who graduated with her doctorate last year dealt with cancer) worked full time jobs. So for those students who had an “and” I applaud you greatly. I’ve seen many of my students graduating from high school and college this year. Sure, I had them in middle school, but they aren’t former students, they’re my students. Teachers will understand that sentiment. My nephew, Charles R. Wells graduated Magna Cum Laude, University Honors with a Bachelor of Science Degree in Computer Science from Virginia Commonwealth University’s College of Engineering. My son, Timothy James, graduated from University of Alabama at Huntsville with a Bachelor of Science Degree in Computer Engineering. Tim was an “and” student who worked a full time job, raised three children, along with his beautiful wife, and served in the military reserves. I’m proud of my family. I’m proud of my friends. I’m proud of my students. This address is for them! But, before you watch it, you may want to go to YouTube and play “Pomp and Circumstance” on repeat about 30 times…just to set the atmosphere. 😉

Today I didn’t take any new pictures. I knew that the timing would be difficult with my wife’s follow-up eye appointment today, so I decided to make today a day of searching and sorting through pictures. Only, it wasn’t bird pictures, it was pictures of my mom to get ready for the memorial service we’ll be having soon. I still have a lot of pics to sort through. I have three external hard drives to find. I’m grateful for them, though, because having had cameras and computers stolen in robberies in the past, I have lots of pictures to choose from.

Since I lived so far away from my mom, I don’t have as many as I’d like. Most have been from the last few times I’ve gone up when she’s been bedridden. I debated posting some of them here, but decided not to. Well, I may post a couple that I’ve made public elsewhere. These were pics taken at my mom’s 90th birthday party this last June. 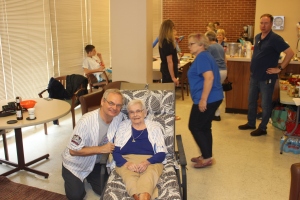 My mom has been a Cubs fan as long as I can remember. At her party, the Cubs game was playing in the background. The Cubs jersey I’m wearing was a gift from my children. We gave my mom her Cubs jersey customized with her name (James) and her age (90). I can’t tell you how grateful I am that the Cubs won the World Series before she died. She got to enjoy that year as she celebrated the season and then the ultimate victory in the series. We had lots of fun discussing the games on the phone during and after the series. I should note that Cubs regalia was the dress code of the day…at the least people were asked to wear blue. 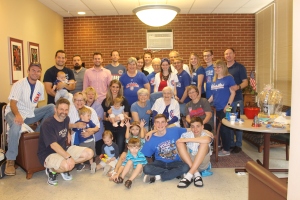 This next picture is of everyone in the family who showed up. We had a LOT of these pictures, because we kept messing up. We were enjoying each other’s company too much. Anyway, my mom’s caretaker patiently took as many pictures as needed. She had a couple of great caretakers these last three years and our family is grateful for them. They started watching over mom after the second time the family was called in because she “wasn’t going to make it.” That’s right, we had been told twice before that she wasn’t expected to live. They just didn’t tell her so she decided to keep on living. While her recent death is a cause to grieve, I knew that every minute we had with her was bonus time. She was the kind of person who exuded warmth and kindness, and while I know this isn’t theologically correct, I can imagine everybody in heaven right now sitting down and eating the egg salad sandwiches that she was known for. Going through these pictures has brought great joy as I remembered the times they represent and the strength and love she showed in all areas of life. I am stronger, my family is stronger because of her love and her example.

Yesterday it seemed like things just drifted along. It was one of those days that nothing was happening nor getting done. Today, it seemed like a lot was happening! After writing my devotional (445 words)  I got ready for my tutoring gig. Then, a long time in the middle of the day doing the actual tutoring. When I got home afterward, Lori Twichell posted a link to Beth Moore’s blog. After reading that, I felt compelled to write a response. It was my mea culpa. Then, since my wife has some extra duties right now, it was time to take daughter to school and bring supper to both of them. When I got home, I started working on my homework. That I should have done Monday. It’s been a crazy week. Then shopping, dishes, and to bed when I finish and post this.

Devotional – May 3 – Praying For Strength Against Temptation

Follow Bob James – The Author on WordPress.com
Join 1,481 other subscribers

SHINE OF A LUCID BEING